by Tecnora on 28th November 2019 in Espresso Coffee Makers

Coffee is the third most popular drink in the world today after Beer and Tea, not including water of course.

So what is the best method of brewing coffee? Filter coffee or Espresso?

For those who just can’t start the day without their daily cup of joe, brewing their cup of coffee with the right ingredients and equipment is serious business.

Further, coffee is no longer limited to being a casual brew.

Speciality coffee shops and baristas who know a thing or two about the brew have been enticing us with a magnificent variety of flavours and styles that each have their own unique appeal.

Whichever group you belong to (and we don’t doubt for a moment that you are a coffee person), you surely know that the ultimate battle for coffeedom supremacy has been raging on between the two methods of brewing- espresso and filter.

So, what’s the real deal about these two, how are they made, and can you use espresso machines to churn out the brew of your choice?

If those are some of the questions to which you are looking for the answers, then you’ve come to the right place.

Just relax, pick up your cuppa joe, and begin reading below. We promise you all the answers and more.

In principle, both espresso and filter coffee require a ‘filter’ to hold the coffee grounds.

Hot water is then poured over these coffee grounds and passes through the perforations in the filter to collect as brewed coffee.

In the espresso method, the hot water is forced through the grounds at high pressure, while in the filter coffee method, the water is allowed to ‘drip’ gradually as gravity does its job.

What Exactly Is Espresso?

Let’s start with the basics: what exactly is espresso? While many would answer it’s a type of coffee, actually that’s farther from the mark than you might guess.

Espresso is actually a method of brewing coffee. Italian in origin, the word signifies a fast preparation method that gives the resultant decoction a different and unique taste.

Espresso is prepared by passing hot, boiling water at high pressure through finely-ground coffee beans. The brew that comes out of the process is as a rule much thicker than coffee brewed by other methods.

This happens because the espresso process leaves a higher concentration of suspended as well as dissolved solids in the decoction.

It’s clear that espresso is not merely a kind of coffee but rather a brewing technique.

So what is the technique that gives an espresso it’s heady aroma and unique taste?

Well, the secret, as they say, lies in the details. When the pressurized boiling water is forced through the finely ground and tightly packed coffee beans, the essential components of the crushed beans: extracts, solids and oils are all drawn out and dissolved in the shot due to the percolation of water at high pressures.

This is exactly what gives espresso its characteristic crema: the frothy upper layer that we have come to associate with it.

So now that you know what espresso is, let’s take a look at the other contender.

But before heading over to the other corner of the ring, a quick booster: you should know that an espresso forms the basis of most of your favourite coffee shop drinks such as lattes, cappuccinos, americanos, cortados, etc.

What is Filter Coffee? 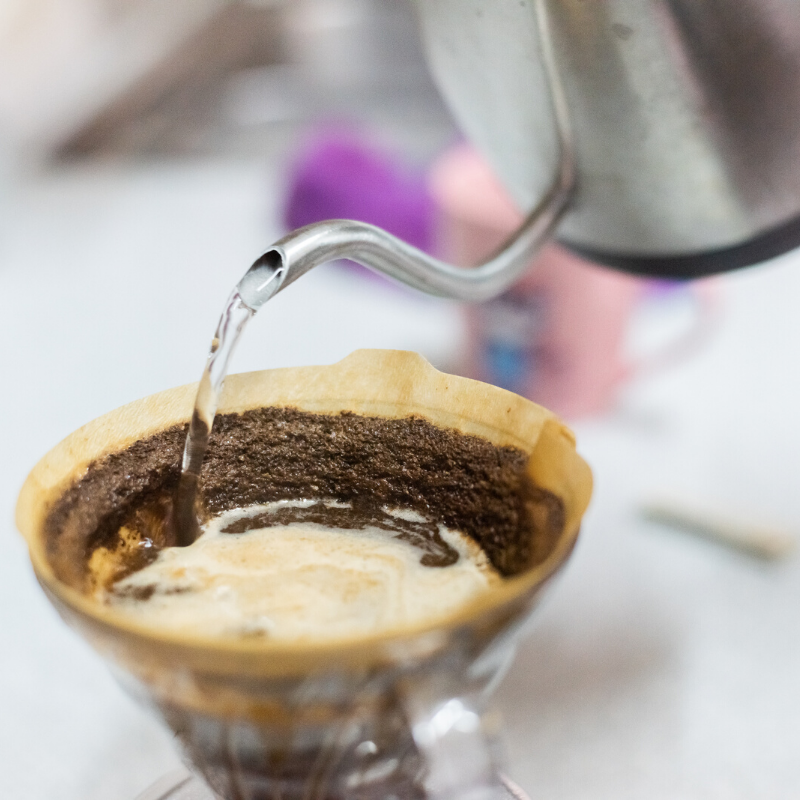 Filter coffee is one of the more traditional methods of preparing your cuppa.

In this process (yes, this too is a process, not a separate type of coffee bean!), the process as the name suggests involves ‘filtering’ hot water through coffee grounds to collect a brew seeped in the flavours of coffee.

Filter coffee requires coarser grounds and more water as compared to espresso, also a proper filter coffee takes time to brew, the strength and the nuances of the flavours would depend upon the coarseness of the coffee grounds and the roast profile as well.

The filter used in this method could be filter paper, or even an ultra-fine stainless steel mesh to hold the coffee grounds.

The popular ‘pour over’ brew method for example, is also a filter coffee method. 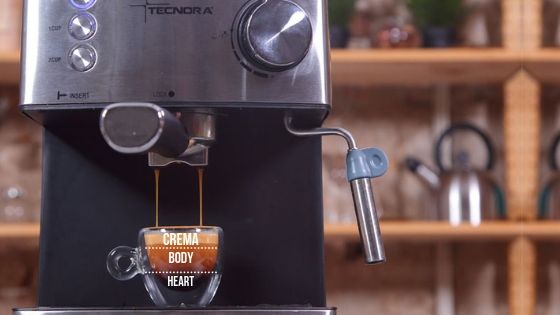 First, let us take a tour of espresso machines. As the name suggests, the machine is meant to give you a quick decoction.

Most home espresso machines work in a simple manner. You take the coffee grounds and pack it into the portafilter, i.e. the metal filter basket meant to hold the ground coffee powder.

Then you press the switch and voila! Hot coffee comes pouring out. But within those few seconds, a lot has taken place inside the machine.

Inside the machine, there is a boiler that heats up the water to high temperatures.
The hot water is then forced through the coffee grounds resulting in a strong ‘shot’ of espresso.
Ideally, a 30 ml heady, concentrated brew of ‘bean juice’.

Now there are two methods by which the pressure can be applied to the hot water.
Based on this, espresso machines are divided into steam and pump varieties.

In the steam machines, as the name suggests, steam from a generic boiler is used to create the pressure for preparing the brew.

While this may seem to be an efficient method, the downside to this is that the pressure produced by this method is rarely more than 3 bars.

As a result, the final result has little or no crema and does not quite taste as an espresso should.

In fact, using a steam espresso machine is not much different than a drip coffee machine with a bit of steam thrown in.

The other variety uses a dedicated pump in order to create the required pressure.

As you can well understand, this method can produce far higher pressure (almost to the tune of 15 bars) that produces a brilliant brew with the characteristic crème layer crowning the cup.

Therefore, it’s a no brainer that a pump-based espresso machine is obviously going to perform better than a steam-based one.

To know more about the mechanisms of pump vs. steam espresso, check out the video below.

And What About Filter Coffee Machines? 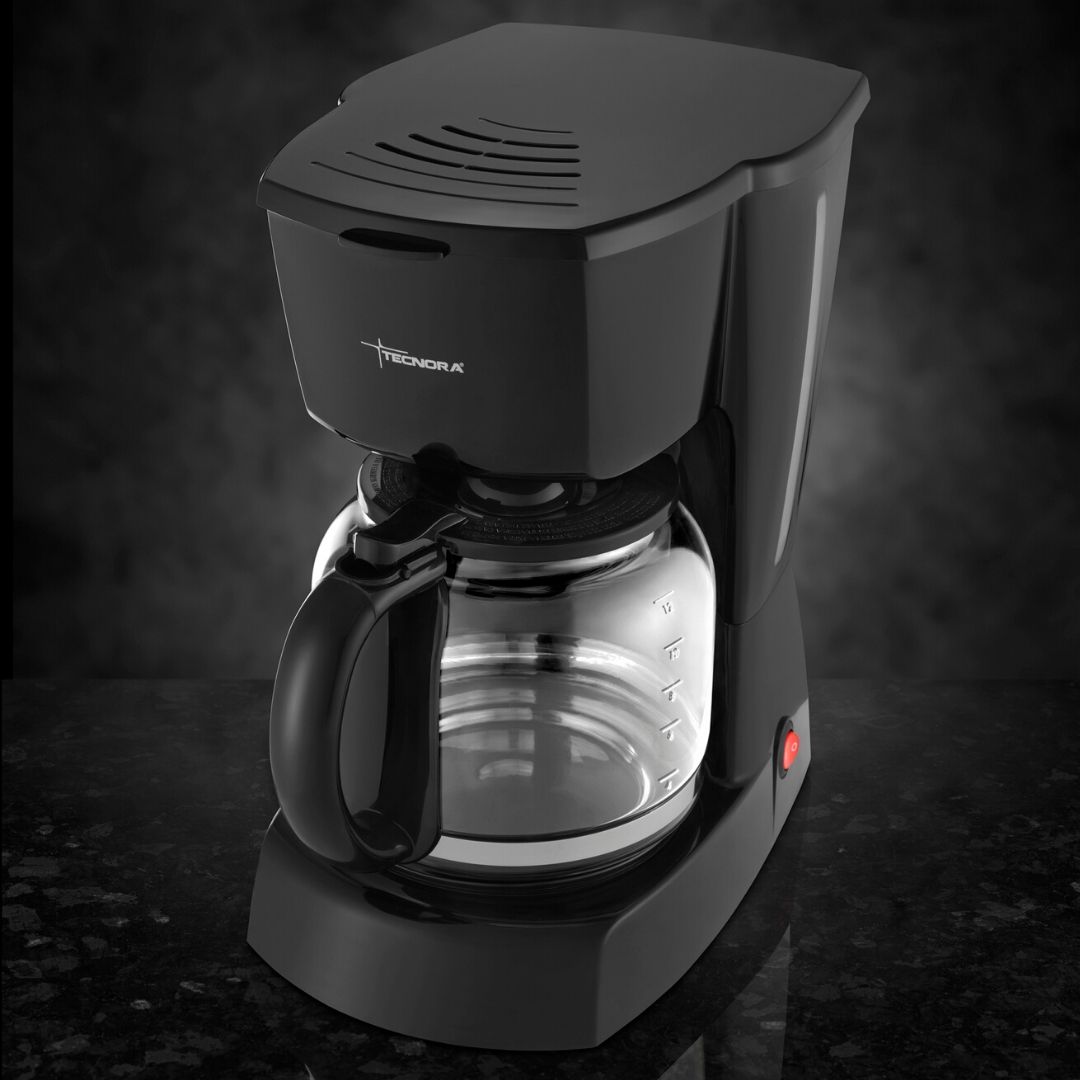 Compared to espresso machines, filter coffee machines are much simpler in operation.

They primarily consist of a metal or paper filter in which the coffee grounds are placed, and then hot water is allowed to percolate through the grounds and collect as a filtrate in a pot.

This is why they are called filter coffee machines, as they basically filter the water through a layer of coffee grounds.

The most common type used at home is the Drip Coffee machine, in which the water is passed through the coffee filter at high temperatures and the resultant brew is collected.

So drip coffee, as you have rightly guessed by now, is another name for filter coffee. 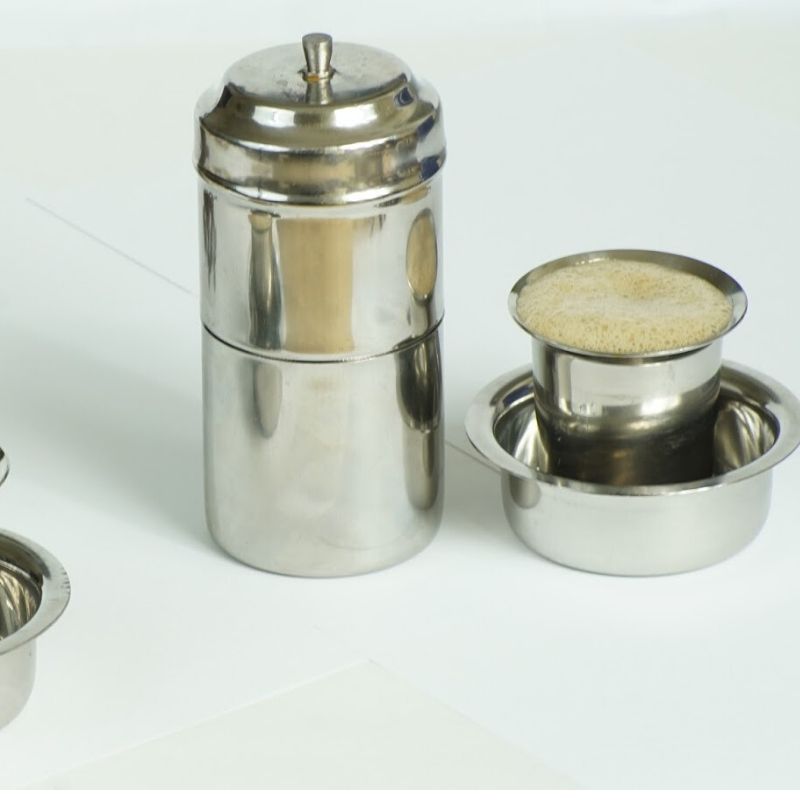 Mention must be made of the South Indian two-chambered coffee filter that is used to prepare the characteristic filter coffee of the south.

This traditional coffee maker consists of a two-chambered vessel.

In the upper chamber, you place the coffee grounds and press it down with a plunger. After this, you simply add hot water and allow the decoction to collect in the lower chamber.

Add sugar and milk to taste and you’ve got that perfect cup of South Indian filter coffee.

Can you make filter coffee in an espresso machine?

Now for a million-dollar question: can you get the filter coffee experience from an espresso machine?

Is it possible to brew similar decoctions by these two very different methods?

To find out, watch the video below.

Now that we have a fair idea about the two processes in question, let’s take a look at the differences that exist between the two, apart from the fundamental brewing process of course.

Depending upon your palate, you would be choosing between light, medium and dark roasts depending on whether you like your coffee mild or strong.

Filter coffee lovers could also begin with light roasts as well and move up further to darker roasts depending on their preferences of brew intensity.

Another point of difference that must be mentioned is that espresso machines are usually much faster than filter coffee machines.

While an espresso machine can give you a perfect brew in a few seconds, with filter machines your brew could take several minutes to complete.

And the winner is…

There’s actually no clear cut answer to this question! Filter coffee does hold its own place in the hearts of coffee aficionados the world over. But in terms of popularity, we can definitely say that espresso occupies a leading position as it is the basis of the multiple coffee varieties you get in your neighbourhood café.

Ultimately, in the end, it all boils down to your personal preferences.